For #MYWriters weekly poetry prompt last week (26 October 2016), the challenge was to write a haiku inspired by the word ‘tear’. I wrote a haiku about rain, which are the ‘tears from heaven’. 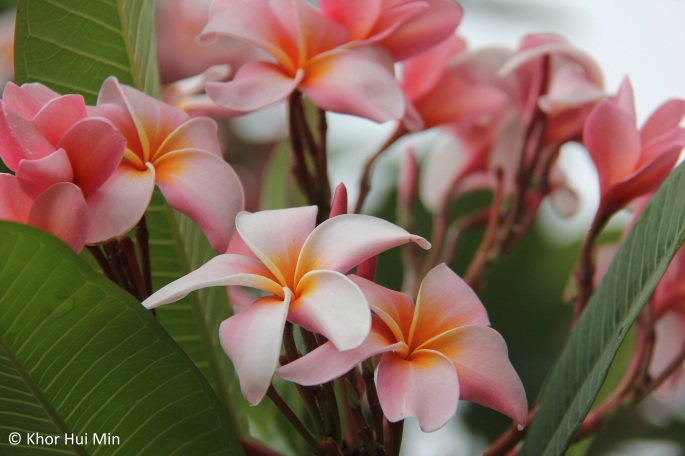 For July 2016 week 3 of #‎MYWritersPoetryPrompt‬, there were two word prompts, ‘light’ and ‘dark’. I wrote about the co-existence of light and dark, good and evil. This poem is not about the triumph of good over evil, but about how their co-existence makes each appear as they are perceived in the present day – light being the good, and dark being the evil.

What is light without dark?
What is dark without light?

The light makes the dark
Look dim and dastardly

The dark makes the light
Look bright and beautiful

One without the other
Will lose its power and influence

For the first #‎MYWritersPoetryPrompt‬ for February 2016 in the ##‎MYWriters‬ FB group, I ‪put up a photo of frangipani flowers, which I took on a marine biodiversity education trip to Terengganu in June 2014.

I thought of writing a poem in Malay, because the photo was taken in Terengganu and frangipani flowers always reminded me of local and traditional culture. So, here it is: 🙂

Here’s the translation for the poem:

This poem is about the fathers, mothers, grandfathers and grandmothers in the little villages and quaint towns, who await the return of the youngsters who, attracted to the bright lights of the glittering cities, have migrated to the west coast to make it big. Enshrouded by the excitement of city life and materialistic success, the youngsters live their days busy with their work and newfound life, and memories and thoughts of their loved ones on the east coast are pushed further and further into the recesses of their consciousness.

I saw an interesting picture in an impromptu poetry prompt yesterday, and decided to write something about it. I scribbled my poem on a piece of paper and it was ready in 15 minutes. 🙂  Here’s the picture and the poem. 😉

With the New Year, comes new beginnings, new experiences, and new challenges. Let’s welcome them with open arms, and with the passing of each challenge, grow to be better and wiser, as well as more resourceful and resilient. Wishing everybody an exciting year ahead.

Over 10 years ago, I began to wonder where I could find a community of writers to hang out with in Malaysia. Of course, the writers must be meeting up somewhere in Malaysia, but where? 😉

In June 2014, I went to the Cooler Lumpur Festival, where I signed up for three workshops. One of them was a writing workshop by Zen Cho. It was called ‘Inspiration, Influence and Interaction’, which sounded very abstract, proper and serious, but it turned out to be really fun and engaging. At the workshop, I wrote a poem in 15 mins called ‘What am I to do?‘, which ultimately started this blog.

At the end of the workshop, I asked Zen Cho – where could I join a group for writers? Much to my delight, she said there was one called The Writer’s Tower on Facebook. After a few months of participating in the group’s writing prompts, my friend Sheela Prabhakaran introduced me to the Malaysian Writers FB Group (#MYWriters) in late 2014. Being part of the group has been interesting and rewarding. I made new friends in the group, which I eventually met in person at the group’s various activities and write-ins. I participated in the group’s writing prompts, which gave me a lot of writing practice, and at the same time, gave me ideas to produce more writing, especially poems.

In August 2015, during the Independence Day weekend, I finally attended my first writing retreat, organised by #MYWriters. It was an interesting experience, which I finally got around to describing in an article last week. The article was published in the Pencinta Alam January 2016 issue. The Pencinta Alam is the national monthly newsletter of the Malaysian Nature Society, the largest and oldest homegrown environmental NGO in Malaysia. 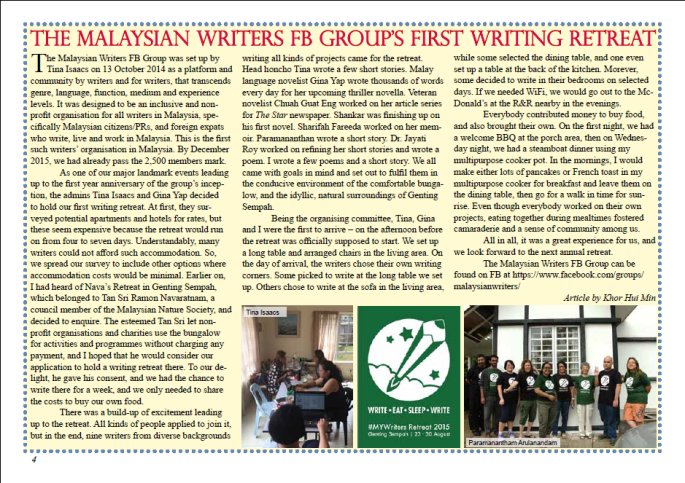 You can also read the article in plain text below:

The Malaysian Writers FB Group was set up by Tina Isaacs on 13 October 2014 as a platform and community by writers and for writers, that transcends genre, language, function, medium and experience levels. It was designed to be an inclusive and non-profit organisation for all writers in Malaysia, specifically Malaysian citizens/PRs, and foreign expats who write, live and work in Malaysia. This is the first such writers’ organisation in Malaysia. By December 2015, we had already pass the 2,500 members mark.

As one of our major landmark events leading up to the first year anniversary of the group’s inception, the admins Tina Isaacs and Gina Yap decided to hold our first writing retreat. At first, they surveyed potential apartments and hotels for rates, but these seem expensive because the retreat would run on from four to seven days. Understandably, many writers could not afford such accommodation. So, we spread our survey to include other options where accommodation costs would be minimal. Earlier on, I had heard of Nava’s Retreat in Genting Sempah, which belonged to Tan Sri Ramon Navaratnam, a council member of the Malaysian Nature Society, and decided to enquire. The esteemed Tan Sri let non-profit organisations and charities use the bungalow for activities and programmes without charging any payment, and I hoped that he would consider our application to hold a writing retreat there. To our delight, he gave his consent, and we had the chance to write there for a week, and we only needed to share the costs to buy our own food.

There was a build-up of excitement leading up to the retreat. All kinds of people applied to join it, but in the end, nine writers from diverse backgrounds writing all kinds of projects came for the retreat. Head honcho Tina wrote a few short stories. Malay language novelist Gina Yap wrote thousands of words in a day for her upcoming thriller novella. Veteran novelist Chuah Guat Eng worked on her article series for The Star newspaper. Shankar was finishing up on his first novel. Sharifah Fareeda worked on her memoir. Paramananthan wrote a short story. Dr. Jayati Roy worked on refining her short stories and wrote a poem. I wrote a few poems and a short story. We all came with goals in mind and set out to fulfil them in the conducive environment of the comfortable bungalow, and the idyllic, natural surroundings of Genting Sempah.

Being the organising committee, Tina, Gina and I were the first to arrive – on the afternoon before the retreat was officially supposed to start. We set up a long table and arranged chairs in the living area. On the day of arrival, the writers chose their own writing corners. Some picked to write at the long table we set up. Others chose to write at the sofa in the living area, while some selected the dining table, and one even set up a table at the back of the kitchen. Morever, some decided to write in their bedrooms on selected days. If we needed WiFi, we would go out to the McDonald’s at the R&R nearby in the evenings.

Everybody contributed money to buy food, and also brought their own. On the first night, we had a welcome BBQ at the porch area, then on Wednesday night, we had a steamboat dinner using my multipurpose cooker pot. In the mornings, I would make either lots of pancakes or French toast in my multipurpose cooker for breakfast and leave them on the dining table, then go for a walk in time for sunrise. Even though everybody worked on their own projects, eating together during mealtimes fostered camaraderie and a sense of community among us.

All in all, it was a great experience for us, and we look forward to the next annual retreat.

You can see the Pencinta Alam January 2016 issue by clicking on this link: PA Jan 2016

I went for a morning walk today, and along the way, I met two dogs. The two males were friendly. They came up to me. I offered them my hand. They each smelled it, then gave it a lick. That meant they liked me. I pet each on the head, then went on my way. However, they started to follow me, especially the white and brown one, who walked beside me, downhill and uphill again. In fact, he sent me home, all the way to my doorstep. Such a sweet doggy. So this morning’s poem is dedicated to my new-found friends. 🙂

Eloquently expressive eyes
Never wanting to say goodbye
Fluffy fur, so velvety soft
As soft as the sheets in my loft
Adoration so endearing
Looking forward to seeing
Skipping and running, round and round
As if I let him out of the pound
Coming home every day
To love at the doorstep, named Jay

Determined to embark on a poetic writing spree, I wrote another poem today, the first day of the Malaysian Writers Group Writers Retreat. This poem is about one of my favourite musical instruments – the harp. 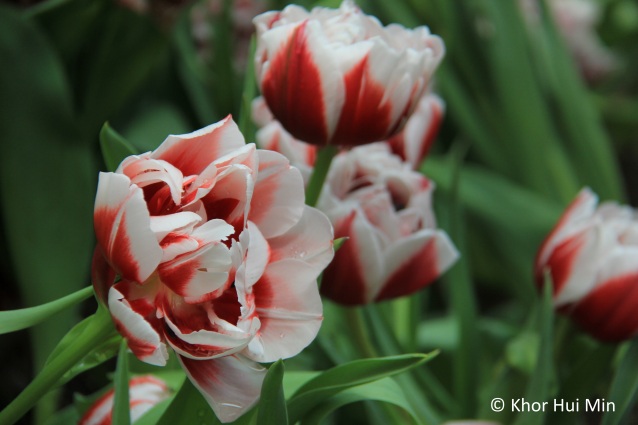 Today is the first day of the Malaysian Writers FB group’s first-ever writing retreat. We were super excited when Tan Sri Navaratnam graciously let us use his Nava’s Retreat for our programme. We hope to make our writers retreat an annual or biannual affair.

The first piece I wrote this morning was inspired by the rainforest all around us. It is aptly entitled ‘Rainforest’.

Undulating hills and valleys of green
Many millions of seasons have you been
Blanketing the earth with your soothing shade
Without which many would wither and fade
Provider of nourishment and shelter
Protector of many; they all matter
With your generous grace, we have survived
Conquered, diversified, flourished and thrived
With sincere hope, your mist-shrouded glory
Will survive for millions more years, surely